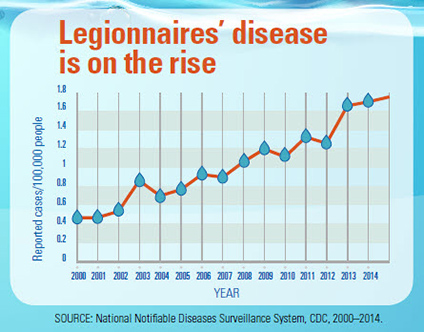 What do you think is the primary reason Legionnaires’ disease has not decreased since the outbreak in Philadelphia — 43 years ago this week — that led to its discovery?

A. Agreement on a strategy for preventing Legionnaires’ disease has not been reached.

B. Information, services, and technologies needed to control Legionella in building water systems are not available to building owners and managers.

C. Building owners and managers have not implemented the information, services, and technologies available to them to control Legionella in building water systems.

“A” is not true. Since the early 1980s, scientists have agreed, based on several studies, that Legionnaires’ disease is caused by Legionella bacteria emitted from cooling towers, plumbing (domestic/potable) systems, whirlpool spas, and other water-related equipment in buildings.

The next milestone was the June 2015 release of ASHRAE Standard 188 which represented unprecedented agreement in the United States about the best approach to Legionella Prevention — implementing a water management program (WMP) for building water systems that can harbor and transmit Legionella bacteria.

“B” is not true, either. Legionella preventive information is available to building owners and managers, down to specific, detailed maintenance procedures and policies. Services needed to apply that information are available from water treatment companies, engineering firms, industrial hygiene firms, and consultants. Technologies for effective water treatment and filtration are also available.

If you have been involved with Legionella prevention, you know “C” is the correct answer to the above question. Despite government and industry warnings that building water systems must be properly managed to reduce the risk of Legionnaires’ disease — and guidelines to explain how — only a small percentage of facilities have voluntarily implemented preventive measures.

The anticipated spike in prevention from the release of ASHRAE Standard 188 turned out to be only a blip, even after the Centers for Disease Control and Prevention (CDC) published a report emphasizing “effective water management programs can reduce the risk of Legionnaires’ disease.”

Hospitals and nursing homes have begun to implement WMPs to comply with the requirement issued by the Centers for Medicare and Medicaid Services (CMS) on June 2017, but only a small percentage of hotels, apartment and condominium buildings, schools, college campuses, commercial buildings, and industrial facilities have WMPs.

Could ASHRAE 514 Increase Legionnaires’ Disease Cases Over the Next Few Years?

There’s no reason to believe facilities refusing to follow ASHRAE Standard 188 would voluntarily comply with the more burdensome requirements of ASHRAE 514 if it were to become a standard. Logically, voluntary WMPs would decrease if the perceived burden was greater.

Worse yet, simply working on ASHRAE 514 could delay voluntary implementation of WMPs by facilities. It happened before. A few hospitals started developing WMPs in 2000 after the Joint Commission announced a pending standard (finalized in early 2001) requiring health care organizations to develop a plan for “managing pathogenic biological agents in cooling towers, domestic hot water, and other aerosolizing water systems.” The number of facilities establishing WMPs continued to increase from 2001 until the first draft of ASHRAE 188P was released in 2010. Between then and the completion of ASHRAE Standard 188 in 2015, however, the number of facilities starting WMPs appeared to have decreased, likely because facility operators wanted to see what the final ASHRAE 188 document included before acting. The same could happen with ASHRAE 514 underway, particularly since busy facility managers pressured with tight budgets may welcome an excuse to procrastinate.

ASHRAE 514 could also delay state regulations. Right now, states could establish a simple principle-based regulation for all buildings other than houses, similar to the CMS requirement for healthcare facilities, requiring a WMP that satisfies ASHRAE Standard 188 (except with auditing of key performance metrics). But with ASHRAE 514 in the works, states may wait for it to become a standard before proceeding with regulations. Establishing regulations based on ASHRAE 514 could also require more work than a simple outcome-based regulation based on ASHRAE Standard 188 because of 514’s broader scope and more prescriptive content.

Since evidence indicates states hold the keys to the next step in Legionnaires’ disease prevention in the United States, a delay in state regulations is a delay in prevention.

What Will ASHRAE 514 Provide That ASHRAE Standard 188 Does Not?

According to ASHRAE (American Society of Heating, Refrigerating and Air-Conditioning Engineers), 514 will be built upon NSF 444, “Minimizing Risk of Disease and Injury Associated with Building Water Systems,” which was transferred by NSF to ASHRAE having never become an NSF standard.

Assuming, then, that ASHRAE 514 will be similar in content to NSF 444, the primary difference between ASHRAE 514 and ASHRAE 188 is that 514 will be broader in scope, aiming to reduce the risk of several waterborne pathogens rather than just Legionella, as well as physical (scalding) and chemical hazards associated with building water. 514 will require detailed, prescriptive WMP procedures, too, whereas ASHRAE Standard 188 essentially outlines only a framework of essential elements a WMP must include.

Yes, a good WMP should include control measures (design, operation, maintenance procedures) found to be effective in minimizing waterborne pathogens other than Legionella — while also protecting building occupants from scalding and harmful chemicals. However, WMP procedures adequately controlling Legionella will control most other biofilm-associated waterborne pathogens — very few additional control measures would be needed specifically for other pathogens. Requiring those few additional measures would be much more easily accomplished by expanding ASHRAE Standard 188 — already designated a standard in “continuous maintenance” — than by developing an entirely new standard.

A new standard (ASHRAE 514) should not be necessary to protect building occupants against physical hazards. The primary (perhaps only) physical hazard ASHRAE 514 would cover is scalding, which in most US states is already addressed, in part, by law. Most US facilities are aware of the scalding risk presented by hot water and are motivated to avoid the liability associated with it.

To the extent requirements to prevent scalding and chemical hazards are needed in a WMP standard, those measures could be added to ASHRAE 188.

If the benefit of ASHRAE 514 is to fill the ASHRAE 188 framework with detailed procedures, 514 would seem to be redundant with ASHRAE Guideline 12, which is being updated for that reason.

Is ASHRAE 514 the Right Idea at the Wrong Time?

Why are very smart professionals working on a standard (ASHRAE 514) aimed to provide more information if the rise of Legionnaires’ disease cases in the US is due to information ignored, not lacking?

Probably because they care. They want to see WMPs done well, done perfectly.

Swinging for the fence isn’t always the right play, though. More information at the wrong time — even if developed with good intentions — could increase disease or delay a reduction.

If ASHRAE 514 is a good idea, but for a later time, a faster path to prevention could look something like this:

43 Years Has Been Long Enough

In the news now are 61 probable and 11 confirmed cases of Legionnaires’ disease, including one death, suffered by guests of a hotel in Atlanta. If the hotel water systems were the source of Legionella that caused the outbreak, an effective and fully implemented WMP based on ASHRAE 188 would almost certainly have prevented it. But until effective WMPs are implemented by facilities, Legionella infections will continue to occur.

In the 43 years since the outbreak at the convention of Legionnaires, researchers have done outstanding work in conducting studies to provide information and technologies for the control of Legionella in building water systems. It’s time to use it. Let’s not ignore or delay the real problem — implementation.

What do you think is needed to increase implementation of effective water management programs (WMPs)? What part, if any, should ASHRAE 514 have in that process? Please comment below.