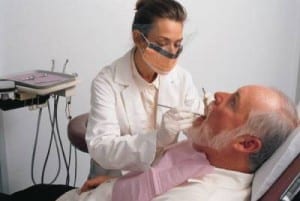 In February 2012, The Lancet reported the first confirmed case of Legionnaires’ disease associated with dental water lines. The patient, an 82-year-old woman in Rome, died just two days after she was diagnosed despite heavy antibiotic treatment. In the 2 to 10 days prior to the onset of illness, she had left her home only twice, both times for dentist appointments. The Legionella pneumophila strain found in the dental water lines matched what was found in the patient (Ricci 2012). (The ABC news story is posted here.)

Dental water lines had been a suspected but unconfirmed source of Legionnaires’ disease for many years. Legionella in dental unit water lines was reported in the 1980s but without associated infection (Oppenheim 1987). In the early 1990s, Legionella bacteria was found at a concentration of more than 100,000 cfu/ml in dental unit water lines in the office of a California dentist who died of Legionnaires’ disease but the investigators would not confirm the dental water lines as the source of contamination because Legionella was also found in the plumbing system of the dentist’s home at a concentration of 100 cfu/ml (Atlas 1995). Also, elevated levels of Legionella antibodies have been found in dental workers, indicating that, compared to the general population, they have greater exposure to Legionella bacteria (Reynolds 1998).

Dental water lines are conducive to Legionella growth (Freije 2000). Biofilm grows well on most types of plastic tubing (Shojaei 1997). In addition, the tubing is small in diameter, so its surface area is large relative to the volume of water that flows through it. The biofilm build-up rate is faster, too, because microbes suspended in the water have a shorter distance to fall before contacting the tubing surface. Stagnation and low-flow rates also contribute to the problem. The water temperature in most dental lines exceeds 20°C (68°F), which is within the growth range for Legionella. For patient comfort, some offices heat dental water to around 37°C (98.6°F), which is ideal for the growth of Legionella, Pseudomonas, Mycobacteria, and many other human pathogens.

Reynolds K. 1998. Should You be Concerned about Pathogen Transmission in Dental Lines? Water Conditioning & Purification, March.