4 Cases in Brunswick, Australia • March 2020
4 residents of a Melbourne, Australia suburb contracted Legionnaires’ disease, confirmed on March 23. Several cooling towers were tested and disinfected, but no samples were positive.

11 Cases in Hong Kong • February 2020
11 residents of a neighborhood near the Choi Hung MTR Station in Hong Kong contracted Legionnaires’ disease, prompting the testing of four cooling towers, three of which had high levels of Legionella bacteria. All four towers’ operations were suspended for a thorough cleaning and disinfection. Testing of other water systems was not reported.

3 Cases in Redhill, England • February 2020
3 staff members of a mental health clinic in Redhill, England were diagnosed with Legionnaires’ disease. In response, the facility was closed for cleaning and testing. Microbiological filters were added to bathroom faucets and additional measures were taken in other high-risk areas.

5 Cases Among Senior Living Residents in Lake County, IL • February 2020
5 residents of a senior living center in Lake County, Illinois were diagnosed with Legionnaires’ disease. After one of the infected residents died, the state and county health departments began working with a water treatment company to conduct water testing. Legionella was found in a decorative fountain, a fixture in one apartment, a pool filter, and the irrigation system.

Major Outbreak at a Prison in Sumterville, FL • January 2020
At least 23 inmates in a Sumterville, Florida correctional facility were diagnosed with Legionnaires’ disease between January 29 and February 11, 2020. Florida health officials worked with facility representatives to conduct water testing. The facility installed point-of-use filters on showers and faucets, as well as two new recirculating pumps.

2 Cases Among Nursing Home Residents in Plainfield, IL • January 2020
2 patients of a nursing home and rehabilitation center in Plainfield, Illinois were diagnosed with Legionnaires’ disease. Officials from both the county and state health departments investigated the cases, recommending updates be made to the facility’s water management plan. They also suggested they restrict patients’ exposure to water in aerosolized form.

3 Cases in a Retirement Community in Carol Stream, IL • January 2020
3 residents of a retirement community in Carol Stream, Illinois were diagnosed with Legionnaires’ disease from May 2019 through January 2020. The county and state health departments launched investigations into all three cases, which included facility water tests and the implementation of a new water management plan.

2 Cases Among Nursing Home Residents in Chicago, IL • January 2020
2 nursing home residents in Chicago were diagnosed with Legionnaires’ disease. After water samples taken by the nursing home did not show positive for Legionella, the Illinois Department of Public Health (IDPH) took additional water samples. The facility also imposed restrictions on water use and installed new filters.

4 Cases in Barrie, Ontario • December 2019
The Simcoe Muskoka District Health Unit reported that 4 cases of Legionnaires’ disease identified among residents of Barrie in December 2019 were not part of the outbreak reported in Orillia two months prior. The health department’s investigation focused on cooling towers, none of which tested positive for Legionella.

3 Cases in Melaque, Mexico • December 2019
3 Americans visiting Melaque, Mexico contracted Legionnaires’ disease in December, 2019. All three patients returned to the U.S. for medical care; it is unknown if the lodging in Melaque collected water samples for testing.

22 Cases in the Bas-Rhin Prefecture, France • November-December 2019
Between November 1 and December 16, 2019, there were 22 confirmed cases of legionellosis in Eastern France, including two patients who died from the infection. All who fell ill were between the ages of 42 and 88.

13 Cases in Elmira, NY • November 2019
There were 13 confirmed cases of Legionnaires’ disease in Elmira, New York. The New York State Department of Health tested a local cooling tower and found the same strain of Legionella that infected the residents. The cooling tower was subsequently shut down for disinfection and remediation.

2 Cases in Hot Springs, AR • November 2019
Legionnaires’ disease was confirmed in two residents of an apartment complex in Hot Springs, Arkansas. Initial testing by the Arkansas Department of Health showed positive Legionella results, with additional testing to be ongoing.

9 Cases in Orillia, Ontario • October 2019
The Simcoe Muskoka District Health Unit (Ontario) conducted testing in early October 2019 after the first of 9 Legionnaires’ disease cases was confirmed in Orillia. All individuals with confirmed cases had spent time recently in the downtown core of Orillia and were over the age of 50 with preexisting conditions. A cooling tower at a sports complex in the city was shut down after it was found to have high levels of Legionella. All municipality-owned cooling towers were also disinfected as a precaution. The definitive source of the outbreak has not been determined. The reports did not mention the investigation of potable water systems.

2 Cases Among Apartment Residents in Salem, MA • October 2019
Legionnaires’ disease was confirmed in two residents of an apartment complex in Salem, Massachusetts. All residents were notified about the cases. After Legionella was found in several samples collected from faucets and showers, residents were advised not to shower and systems were disinfected. Plans were made to replace shower heads and faucet aerators.

3 Cases Near Columbus, OH • October 2019
A hospital near Columbus, Ohio reported 3 cases of Legionnaires’ disease. While the source was not confirmed, the hospital put in place several water restrictions, to include hyper-chlorination of the water systems.

8 Cases at Pennsylvania NICU • October 2019
8 infants were sickened by Pseudomonas bacteria found in a neonatal intensive care unit (NICU) in a medical center in Danville, Pennsylvania. 3 of the infants died and the rest underwent treatment. Both the CDC and the Pennsylvania Department of Health were involved with the investigation to determine the outbreak’s source, which they believe to have been outside the NICU. In response to the outbreak, the hospital increased water chlorination and installed filters. 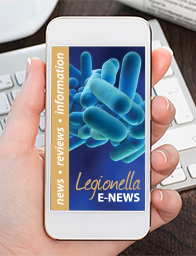 Don't miss out on important announcements about regulations, technology, outbreaks, articles, and events! Join other professionals who stay informed via our FREE e-newsletter, Legionella e-News.

Don't miss out on important announcements about regulations, technology, outbreaks, articles, and events! Join other professionals who stay informed via our FREE e-newsletter, Legionella e-News.

Request a Demo of LAMPS

Please fill out the form below and a team member will contact you shortly.